On the 15th of September 1979, the Assembly of the Republic passed a law creating a National Health System – Serviço Nacional de Saúde (SNS). This law decrees that the State is responsible for upholding the right to Health Protection, as established by the Constitution of the Portuguese Republic. In 2019, Portugal celebrated the 40th anniversary of SNS.

This anniversary is an ill-timed pun for public perception. In fact, it was preceded by months of mediatic reports: a significant number of people do not yet have a family doctor, many hospitals are under tremendous strain, there is a lack of investment in modernisation, the System is understaffed and the Health Care Professionals are suffering from Burnout at an alarming rate.

The 2019 European Health Equity Status Report from the World Health Organization (WHO) shockingly reveals that out of 33 countries studied, Portugal is one of only four, which have reduced public health spending between 2000 and 2017.

Even after retiring from politics, its founder remained an influential voice in Portugal 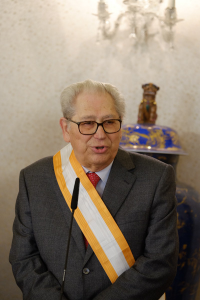 In 2015, the founder of the SNS, António Arnaut, addressed the then President of the Republic, Aníbal Cavaco Silva, pointing out that the SNS was being kept alive on assisted breathing and, to make things worse, there were people who wanted to disconnect it from the machine and cause its death. He reminded the President that his duty was to warn the government not to do any further wrongdoing to the SNS, and he appealed the Head of State to take a public position and tell the Government that Healthcare is not something to mess with.

1979 is a symbolic year for the SNS, it is the year we celebrate. However, the opening act had been performed one year before that, by this man, who at the age of 79 years old, doesn’t stand down and gives the President, Government and Country a piece of his mind. Back in 1978, while he was Minister of Social Affairs, the economic situation wasn’t much brighter: Portugal was on the verge of bankruptcy and the International Monetary Fund (IFM) barging in. The timing for the economic burden of starting a publicly funded Health Care System was far from ideal. And yet, it happened!

The 2nd Constitutional Government had its days counted and that much was clear to António Arnault. He didn’t waste any time. Without notifying neither his party, nor even the prime-minister he wrote a dispatch, signed it, sent it off and went home. Legislative texts are only binding after publication, this would have taken up to several weeks, which would have given enough time to the new government to repeal it. He dispatched it directly to one of his Brothers from the Free Masons – a means to an end – nine days later it was published It awarded access to the Medical-social services for all citizens, regardless of their social security contributions. This ensured, for the first time, the universality, generality and gratuity of health care, as well as a drug reimbursement policy. As quoted in his Biography  “once it was published and the crowds began to flock to hospitals, there was no chance of going back”.

When it comes to Protecting the SNS, what Portugal needs is an advocate who is determined and committed to strong principles of ethics and justice; someone who will stand up to anyone and won’t let the SNS down. The Lancet, a peer-reviewed general medical journal, reports on the anniversary of the SNS and leaves an important message: this milestone presents a new opportunity. The decline of the SNS has been laid bare.

Now the government must strive to prioritise health and make assure that health care remains accessible for all. 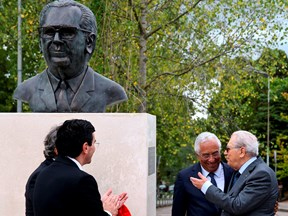 Bust of António Arnaut, at the Hospital Centre of the University of Coimbra (CHUC).

WHO WILL NOW STEP UP AND BE

THE NEW UNBREAKABLE ADVOCATE FOR THE SNS?

The Father of the SNS