From Tobacco to Candy Ropes

I always thought cigarettes smelled horrible, so they must also taste bad, right? However, millions of people worldwide and approximately 14% of Americans smoke cigarettes on a regular basis. When one adds in the use of e-tobacco products like vape pens and Juuls, the prevalence rises even higher.

Not only does the prevalence rise, but the age range with the highest prevalence also changes. It shifts from ages 25-44 and 45-64 who smoke the most cigarettes to much younger ages, even middle and high school students who are the most frequent users of e-nicotine products. The rush one feels when smoking traditional tobacco products comes with a stagnant, stale smell that follows not only you but also everything you own. Though I am not a smoker, I imagine that the strong taste of tobacco masks every other taste you experience for some time.

Now you can feel the same nicotine high, but with a fun flavor. These e-cigarette products, geared specifically towards kids, include flavors like sour strawberry candy rope and nutty buddy flavor, a concoction of chocolate and peanut butter. With these new flavors, it is much more appealing to smoke. Instead of tasting like an old man who lost his taste buds, young people can taste nicotine products that are reminiscent of candy.

Known the Land of Plenty for a reason, America provided the widest array of flavors in all sizes, strengths, and price points. This made the Juul, the most commonly known e-cigarette, almost ubiquitous among young people. A Juul is a vape pod device that is the same size and shape as a USB drive, and is charged the same way. It is easy, fast, and portable. Many companies even began to sell Juul cases to further personalize the vaping experience. I have a specific memory of a girl charging her Juul, covered in Louis Vuitton duct tape, in her laptop during health class my first year of university. I proceeded to ask what flavor it was, and she responded “oh it’s champagne to match the Louis theme. I have another one at home for other flavors.”

This is when it hit me – an entire industry once focused on a target market of young professionals has shifted its main directive to those 18-22, the average age of American university students. As having a Juul became virtually synonymous with being a member of a social fraternity or sorority, often to the point that people asked me why I was a sorority girl without a Juul, I knew the problem had escalated to a larger scale than any one entity had intended.

However, the Trump administration acknowledged this escalation. In September of 2019, the White House proposed a ban on the majority of flavored e-cigarette products, leaving only tobacco and menthol flavors. In December, this new law went into effect. 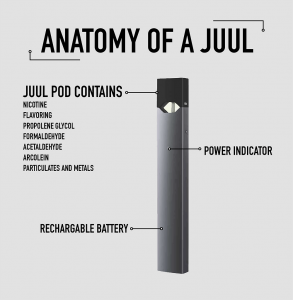 Though I cannot speak to the data, I saw from personal experience that the sudden disappearance in appealing flavors made many peers rethink their choice. For them, it was only the flavors that appealed to them. It was an inexpensive, trendy form of oral fixation.

It is for this reason that I chose the ban on flavored e-cigarette products as a major public health milestone. Though it in no way eradicated nicotine use or dependence, it made it less appealing for college-aged adults to smoke thus reducing the overall prevalence in the U.S. This was on the heels of the U.S. Centers for Disease Control and Prevention’s (CDC)  naming of the associated lung problems called EVALI (e-cigarette or vaping product use-associated lung injury) in August of 2019. In combination with the recently raising of minimum tobacco age from 18 to 21, the CDC hopes that this public health milestone will reduce the number of teen and young adult e-tobacco users for an ultimate goal of reducing tobacco use and dependency nationwide.